I have always been interested in sailing, from the sheer thrill of being on the water, to the engineering of how ships move forward against an invisible wind.

Years ago my husband and I took the White Sails courses and received our certificates, which is basically Kindergarten in the sailing world, but it was one of the most fun times we have ever had. Over the summer we slowly progressed from huddling in the centre of the boat for fear of tipping over, to gradually shifting our weight to the top side edges in order to gain more speed. By the end of the classes we had begun to “see” the invisible, and to steer the boat, instead of it steering us.

Later we bought a small 16 ft Sunfish and sailed around the Bedford Basin in Nova Scotia. On a warm Saturday afternoon, with a soft breeze, we could drive in and out of the little coves the way one would drive a car, but if the wind was up and the white caps were frothing, then I had to rehearse in my mind what way to turn the tiller, before I actually did it.

One day, during a high wind, I heard a voice yelling at me, “Veer Off! Veer Off!”. It was coming from a man onboard a much larger @ 30 ft boat, who wanted me to turn starboard to get out of his way, because his team was in the middle of a mens race around the harbour. It was a total surprise and I didn't know they were there until they were alongside. I didn’t move the tiller one way or the other which annoyed the man who was yelling at me, but he should have been thankful, because I was just making sure I didn’t run into them. Besides, I was quickly nearing the rocks and needed to stay on the same heading. I also knew enough that I had the right of way, not that it mattered to them. Many people who are in the heat of a race would rather crash then give in. In a few seconds when I turned to see if they were still there, the fuss was over and they were long gone in the other direction.

I have always thought that sailing was a metaphor for the Christian life, in that “seeing” the wind and knowing our rights in the natural world is akin to seeing God and knowing God’s ways in the supernatural, both examples being absolutely crucial to the success of moving forward. Great teams of sailors with millions of dollars and some the world’s best engineers, invest each year into sailing races just for the fun and athletic competition, and so too we need to invest in our life with God.

Many years ago I read two books about sailing around the world. One was titled “Maiden Voyage” which told the story of Tania Aebi, who in 1985 as an 18 year old, took on the ultimate challenge. Her stories of persistence when her boat needed repair, and of the Garden of Eden-like groves where she restocked her boat with food, were inspiring.

The other book was titled “Sailing Alone Around the World” by Joshua Slocum, who in 1895 set sail on his epic adventure of courage and surrender. Slocum was born in Nova Scotia, and the sheer madness by today’s standards, of setting out with a wooden hull and a pocket watch to circumnavigate the earth, was a must read.

The painting on this page, done in 1992, is in honour of Joshua Slocum and his courage. It is titled "Slocum's Night" and I used sand from P.E.I. to “paint” his boat named the “Spray”. I think the image was from the book but am not sure. 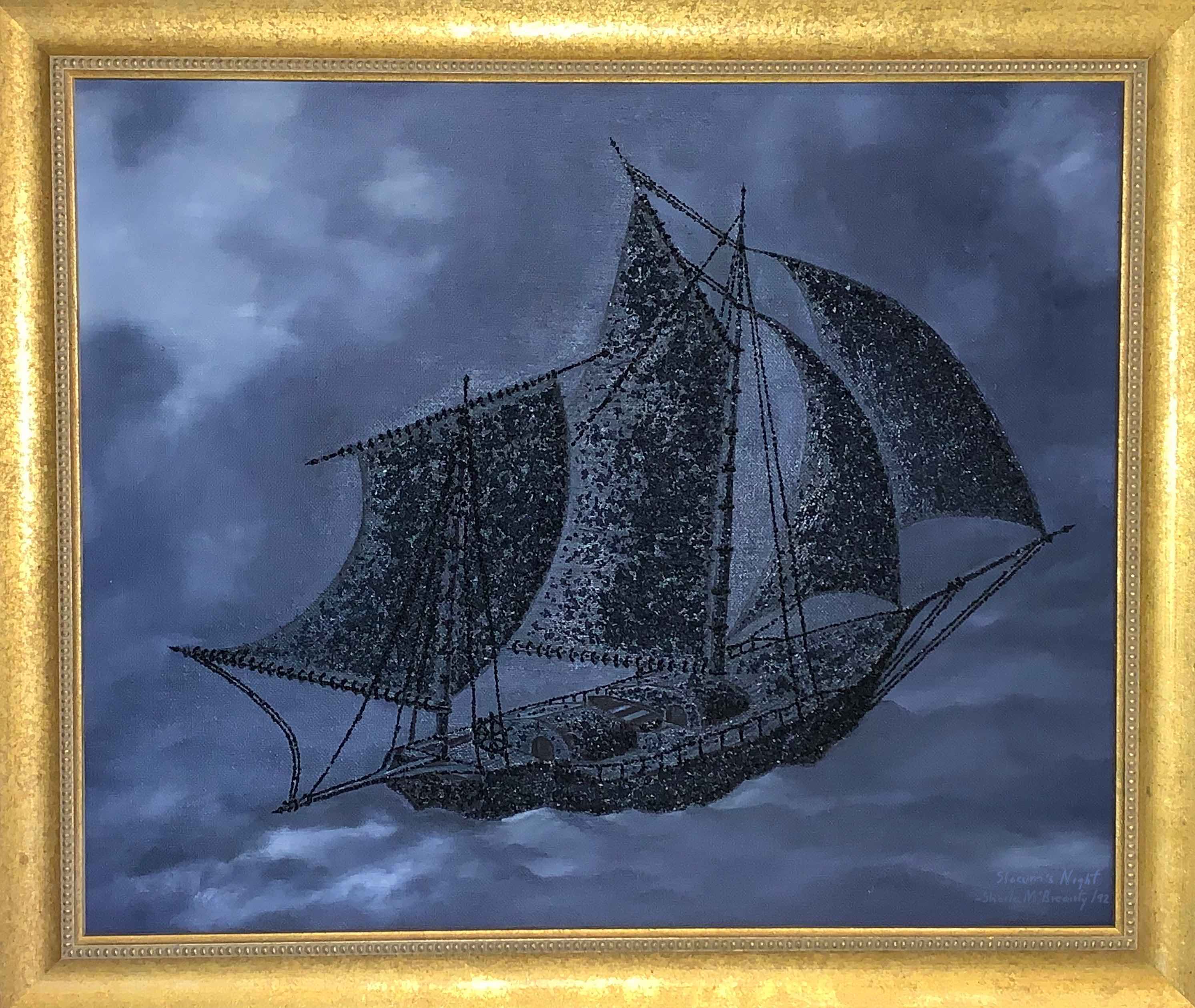 ART - Bring Me A Donkey